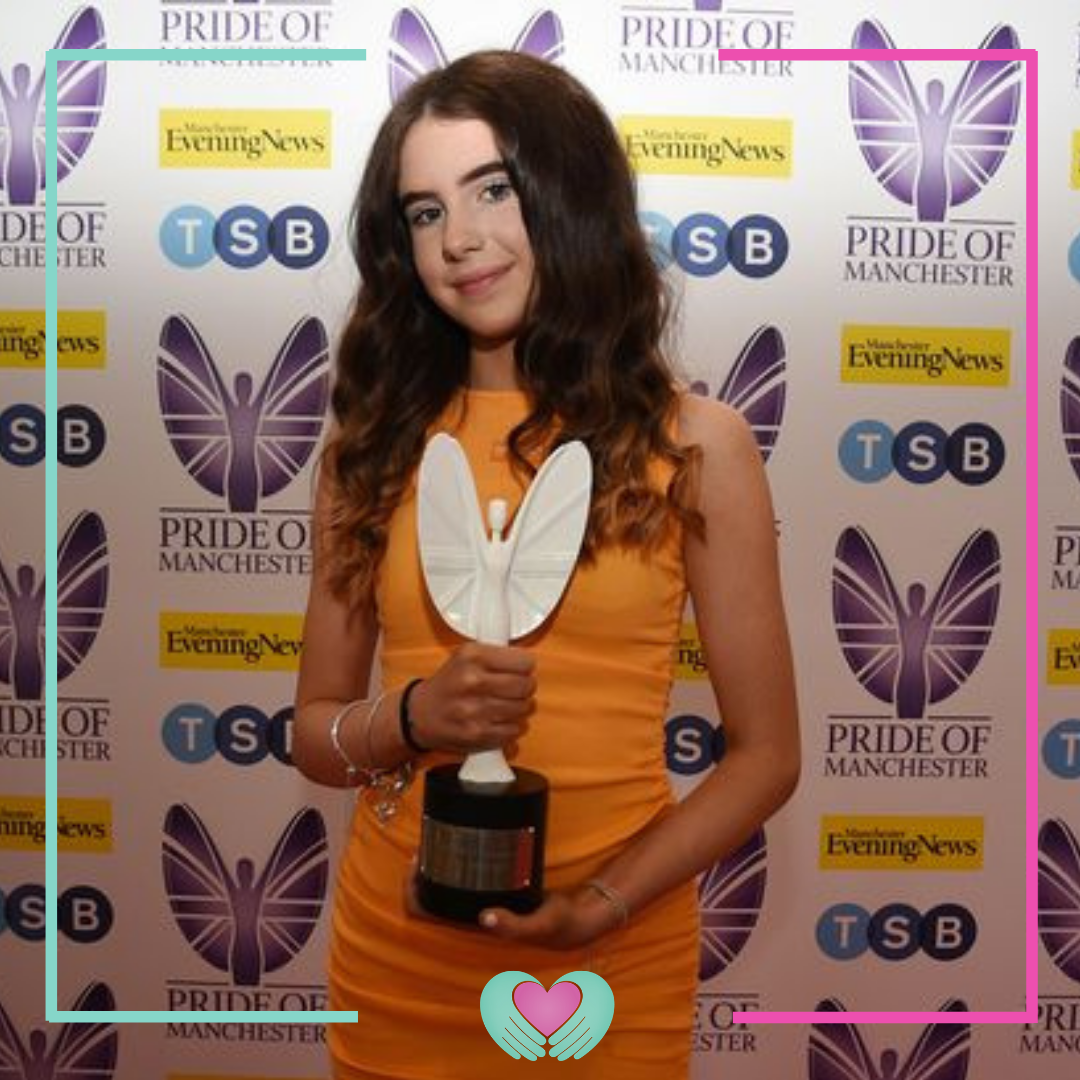 Junior fundraiser, Keira Arnold, aged 13 has been fundraising for Dr Kershaw’s Hospice for over four years raising money for ‘Keira’s Wishes’, her very own fundraising initiative which provides patients with their last wishes whilst at Dr Kershaw’s Hospice. Her incredible fundraising has seen her raise over £36,000 for the Hospice, with Pride of Manchester selecting her to receive their prestigious Teenager of Courage Award earlier this month, an Award presented to those who have battled against the odds to help others. Keira was initially surprised with the Award by Hits Radio presenters Gemma Atkinson and Wes Butters before attending the official Pride of Manchester Awards event hosted by TV star, Kym Marsh, at the iconic Midland Hotel in Manchester city centre on Saturday 15 May.

Keira started her fundraising journey for Dr Kershaw’s after her dad was cared for at the Hospice, and her sole aim has been to help make special forever- memories for our patients and their families. Her fund, ‘Keira’s Wishes’ has enabled patients to enjoy special moments with their loved ones with precious weddings, early Christmas days, trips to the seaside, and patients have even just been given the chance to enjoy their favourite tipple or a chippy tea. Most recently, Keira also kindly used some of her funds to buy smart TVs for each of the 12 patient beds in the Hospice’s new In-Patient Unit, enabling patients to relax and enjoy their favourite programmes from the comfort of their own rooms.

Keira’s fundraising activities have seen her organising hugely successful virtual markets during the pandemic, supporting both small local businesses and the Hospice. She’s also organised many celebration day raffles asking local businesses to support with prizes, and her craft skills have seen her make and sell anything from cards and baubles to dream catchers, wreaths and bookmarks, with all the proceeds going to ‘Keira’s Wishes.’

The Pride of Manchester Awards in partnership with the Manchester Evening News and TSB, celebrate the achievements of truly remarkable people who make our world a better place. The regional winners in each category- Manchester,

Birmingham and the North East then feed into being considered for the shortlist for the national Pride of Britain Awards, screened each year on ITV.

Keira was chosen to win the Award over hundreds of other young people across the region for her phenomenal support of Dr Kershaw’s Hospice.

Joanne Sloan, Dr Kershaw’s CEO said: “Keira’s support, dedication and enthusiasm for her fundraising has been awe-inspiring over the past few years. For a young person of her age to be so committed and so supportive of our Hospice and our patients is just so wonderful to see. Keira truly deserves the Pride of Manchester Award, she is an inspirational young lady, and we can’t thank her enough for all she does for us and for the special memories she gives to our patients and their families.”

Keira’s mum, Stacey Arnold accompanied her along with her grandma, Julie Smith to the Awards at the Midland Hotel, she said: “When I heard Keira had won The Pride of Manchester Award I was completely shocked but so very happy for her! Her fundraising to help other people is what makes Keira her happiest but I think it's lovely that somebody took the time to nominate her and show Keira she really does make a difference.”

Keira was surprised and thrilled to receive the Pride of Manchester Award, she said: “I am really shocked to have won this wonderful Award, it's so nice to know that people like what I do in my fundraising. Helping other families makes me really happy, especially in difficult times. It inspires me to keep going.”

Despite her impressive fundraising total, Keira says her target is to keep going until she raises £1 million to make more wishes come true. “That would be my one wish, so that I can help even more people,” she said. “But I’m not really planning on stopping at all. I just want the best for everyone.”

The Pride of Manchester Awards can now be watched on both the Pride of Britain’s Facebook and YouTube channels.

Earlier this year, Keira was also named as Oldham’s Young Citizen of the Year 2020 and presented with The Mayor of Oldham’s Appreciation Award, for her passion and determination in supporting her local Hospice. In previous years Keira has received a number of awards for her extraordinary support and fundraising efforts for Dr Kershaw’s, being named as National Young Fundraiser of the Year in 2018, followed by being presented the Mayor of Manchester Special Recognition Award and the prestigious Diana Award.

If you are interested in following in Keira’s footsteps and taking on your own fundraising challenge to support the vital care that takes place at Dr Kershaw’s Hospice, call our Fundraising Team on 0161 624 9984.