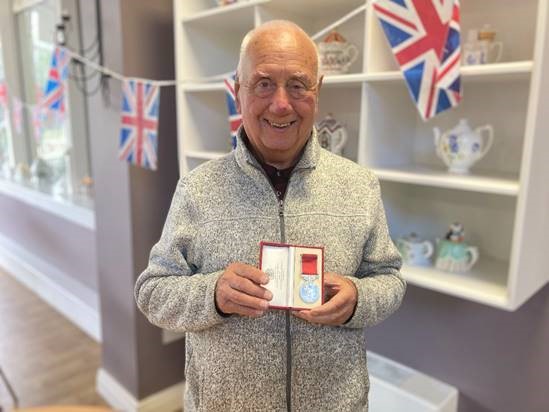 Oldham B and Q worker, Alan Wrigley has been collecting funds for over twenty years for local charities, and with over £175,000 raised in total, Alan was invited on Wednesday 18th May, to Buckingham Palace to receive the British Empire Medal at the Queen’s Garden Party.

Alan chose Dr Kershaw’s as one of his local charities after his son was cared for there and sadly passed away, and has collected over £12,000 for the Hospice.

Alan’s fundraising has included a bungee jump, sky dive and a shark swim along with his daily charity bucket collections on the door at B and Q, which he does three days a week on top of his role welcoming customers.

Alan said: “I collect £1,000 for each charity and then alternate to the next. I’m really proud to have received this medal presented by the Lord Chamberlain. I even met The Duchess of Cambridge, Kate who was a lovely lady. I also collect for Spring Hill Hospice after my wife was cared for by their team.”

Joanne Sloan, Dr Kershaw’s Chief Executive added: “Alan does an incredible job fundraising for our Hospice and other charities, what an achievement for him to have received this medal, we are incredibly proud of him and truly grateful for everything he has done to support our Hospice.”